There are many conditions affecting the colon and rectum, including both benign and malignant. Colorectal cancer, sometimes called colon cancer or rectal cancer, is one of most common cancers affecting men and women in the U.S. While this is a highly prevalent condition, more and more people have successfully been cured of their colorectal cancer over the years, due to an increase in screening with colonoscopies or Cologuard® testing. These screening methods can lead to the removal of benign polyps before they develop into a cancer or hopefully identify a colorectal cancer at an earlier stage.

What Is Colorectal Cancer?

The term “colorectal cancer” refers to malignant polyps or tumors in the large intestine. Often, the cancer first manifests as polyps, or abnormal growths which can appear in the colon or rectum. The third most common cancer in the world, colorectal cancer can be managed when detected early, and several types of treatments, therapies, and surgeries exist to ease symptoms.

According to medical professionals, the best way to potentially cure colorectal cancer is to diagnose it in its early stages. The general population is recommended to start screening at age 45, and those at an increased risk are usually advised to be screened even earlier. 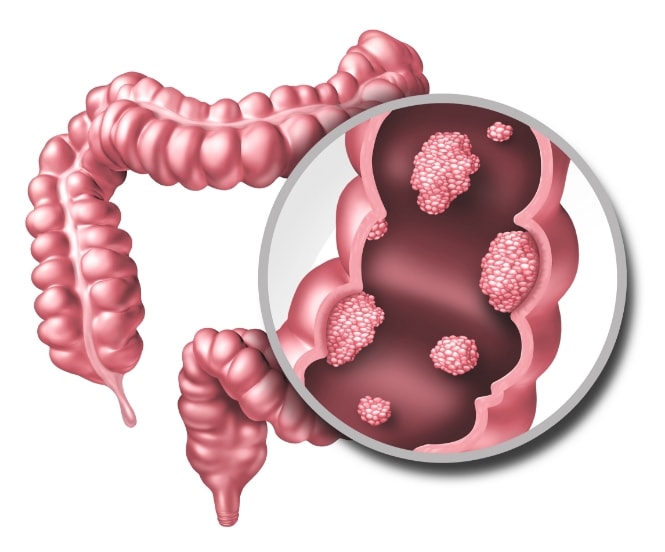 What Are the Symptoms of Colorectal Cancer?

Many people who suffer from colon and/or rectal cancer experience little to no symptoms until it has reached a more advanced stage. This is why it is so important to undergo regular screenings to diagnose colorectal cancer at its earliest stages. Potential signs and symptoms of colorectal cancer include:

What Are the Stages of Colorectal Cancer?

To identify the severity of colorectal cancer, oncologists generally use the TNM Staging System. This system was developed by the American Joint Committee on Cancer (AJCC) to determine the degree to which the cancer has spread beyond the affected area (in this case, the large intestine). The five stages of colon cancer are as follows:

There is no known cause of colorectal cancer, but the condition is believed to be connected to environmental and genetic factors. Most, but not all, colorectal cancers begin as benign polyps which are pre-malignant growths within the bowel wall. These benign polyps eventually can progress to cancer. The polyps are often identified on a colonoscopy.

What Are Risk Factors of Colon & Rectal Cancer?

The majority of patients who develop this type of cancer are over the age of 50. In addition, colorectal cancer is found more often in men than in women.

What Is a Colonoscopy?

A colonoscopy is an evaluation of the colon and rectum that is performed endoscopically.

This screening test is typically recommended for adults 45 and older, every 10 years if results continue to be normal, which are new guidelines from the American Cancer Society. A colonoscopy may also be performed on people with symptoms of change in bowel habits, rectal bleeding, diarrhea or constipation and abdominal pain. Polyps that are identified can often be removed endoscopically, but if they are not amenable to endoscopic removals, they may require a surgical resection. Often, benign polyps can be removed with laparoscopic surgery or robotic surgery. Minimally invasive techniques utilizing the laparoscope allow for the colon to be removed and brought out through a small incision. These minimally invasive surgical techniques decrease hospital stays and decrease the duration of recovery.

What Are the Different Types of Colon & Rectal Surgery?

How Is Colon & Rectal Surgery Performed?

In the past, colorectal surgery required open incisions and resulted in long hospital stays for the patient, as well as a prolonged recovery period of time. Our surgical team performs minimally invasive colorectal surgery through laparoscopic and robotic techniques. These methods allow our surgeons to offer procedures that were not easily performed otherwise in the past. They ultimately lead to less postoperative pain, faster healing time, decreased hospital stay, decreased recovery time and less of a risk of developing an abdominal wall hernia as a result of the surgery. 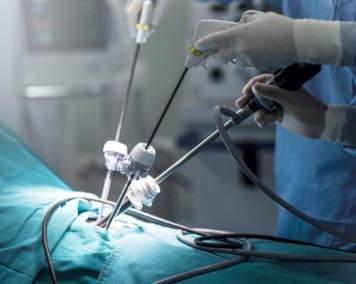 Minimally invasive laparoscopic colorectal surgery may be recommended in order to treat many disorders that require removal of a portion of the large intestine. These conditions include benign colorectal polyps not amenable to endoscopic removal, malignant polyps, colorectal cancers, diverticular disease, rectal prolapse as well as others. 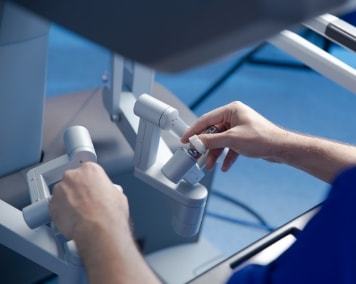 Performing minimally invasive colorectal surgery with the da Vinci® robotic system has many advantages. This advanced technology features the use of a magnified 3D HD vision system and special wristed instruments that bend and rotate far greater than the human hand. The da Vinci® robotic technology enables a surgeon to operate with enhanced vision, precision and control. The ability to work in the colon and rectal area with improved visualization and access is dramatic with respect to the use of the robotic system. This allows the surgeon a better ability to preserve the anal sphincter in low rectal cancers in particular. In addition, the da Vinci® robotic system offers integrated fluorescence imaging which allows a surgeon to assess the blood supply of the colon and rectum that they are going to connect during an operation.